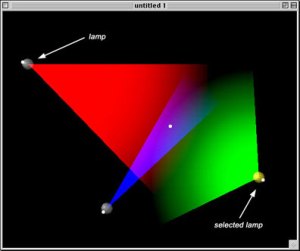 Interpolator was written by MSc research student Martin Spain in 2001 and is an interpolation system that works with INA-GRM’s GRM Tools DSP software. GRM Tools is a well-established DSP tool for musicians and sound designers. Collaboration was possible with the developers of GRM Tools, who were able to modify the GRM Tools host application to allow Interpolator to communicate with the GRM Tools plugins. The plugins themselves exist in VST format, and are launched either from within a VST-compatible audio application or from the GRM Tools host application. Interpolator currently functions as a standalone application that runs on Mac OS computers (Mac OS 8.1-9.x) alongside the GRM Tools host application, communicating with the plugins by means of a shared library. It allows the user to control multiple signal processing parameters simultaneously by interpolating between different parameter sets.
In typical graphical interpolators a ‘gravitational’ model is used, where each group of settings is represented by a ‘planet’ whose size indicates its level of influence. Several ‘planets’ are placed on a two-dimensional space and a cursor moved around in the space to produce a smoothly varying series of control values. Interpolator builds on this idea, allowing a more flexible control space by using a ‘light’ model. Here, each group of settings it represented by a ‘lamp’ whose beam represents its area of influence. With this system we gain several advantages:

• The influence of the ‘lamp’ is visible so we can see when and where it has an effect.

• The beams have a variable aperture so that the influence can be directional.

• The size of the beam represents influence so that lamps themselves don’t have to take up a lot of space in the interpolation area (unlike variably sized ‘planets’).

• Interpolator has four beam colours, each colour controlling a different set of parameters, so we can have multiple interpolation sets on the same control space.

• We can still revert to a gravitational-like model by using lamps with 360 degree apertures. 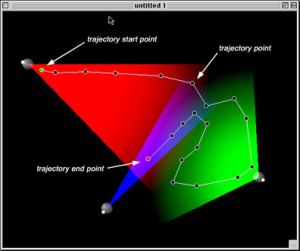 editable trajectory in the space

The picture here shows the same interpolation space with a trajectory plotted. Playback along the trajectory can be looped, and the speed of the playback can be altered in real time.